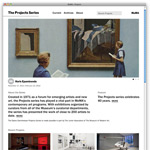 Coinciding with the 40th anniversary of MoMA’s groundbreaking Projects series, we’ve redesigned the Projects website, including a vast expansion of the archives. 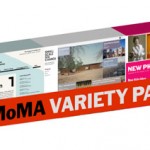 The end of summer often means time to go back to school. For those of us at MoMA, it also means a slew of new exhibitions. And this fall we have quite a bounty, many of which are accompanied by a special online feature. For today, we present five websites for five exhibitions:

Prints and the Web—Introducing Picasso: Themes and Variations When you think about printmaking, the Web may not be the first thing that comes to mind. You may envision instead old etching presses, or heavy lithographic stones, or stacks of paper waiting to hit the press. But in fact, MoMA’s Prints Department has long been interested in using the Web as a way of sharing information: using animated, interactive multimedia components as a way to make the material come alive. Our online projects are all available on MoMA.org, from our earliest experiments all the way back in 1998 with Miró’s Black and Red Series…

It was one year ago tomorrow that we launched the latest redesign of MoMA.org. (March 6 is a day that will be forever ingrained in the Digital Media team’s memory!) But MoMA has had an online presence for fifteen years now, since 1995, when an exhibition site for the design show Mutant Materials in Contemporary Design was developed. The following year, the Museum’s website, MoMA.org, officially launched, and we’ve been doing exhibition feature sites ever since (including our most recent one for William Kentridge: Five Themes).

Talk about a blast from the past. Here’s a look at MoMA.org through the ages: We initially suggested five design firms as candidates to design and build the Design and the Elastic Mind website. Paola Antonelli, the exhibition curator, had gone through around twenty links from three firms when we showed her Yugo Nakamura’s personal site, yugop.com. The simple white page that greeted us was immediately invaded by dark, two-dimensional cascading balls. We watched for a few minutes, mesmerized by the simple physics of bouncing. Paola decided to go with Yugo’s firm, tha ltd., on the spot.

Yugo’s work has been inspirational to me since 1998, when I first came across MONO*crafts 2.0 (more on that below). In fact, I can honestly say that seeing that website was one of the reasons I decided to transition from print to web design. His site was among the first to effectively and convincingly instill “life”—flexibility, mutability, playfulness, depth, speed—into what was then a very static experience.

So it was quite an honor for me to ask him a few questions about his experience working on the Design and the Elastic Mind website, and about Web design in general.

Meet Me: From Paper to Pixels

The Graphic Design and Digital Media departments work on the same floor in the MoMA offices, and though we may disagree on how many overhead fluorescent lights should be on (the correct answer is zero), we all enjoy getting the chance to work together. It’s not often that we get the chance to work on a project from its inception, so the Meet Me website was a unique opportunity. Screenshot from the Meet Me site

Last week, Ingrid Chou explained the process of creating the lovely Meet Me publication. For the website, we worked with Ingrid and designer Sam Sherman (as well as the Education Department) to translate elements from the publication into a digital format. We also wanted to take advantage of some of the new features and frameworks we created for the MoMA.org redesign. A couple weeks back we previewed the Tim Burton exhibition site. Now that you’ve seen the initial directions that Big Spaceship proposed for the site, let’s see how they created the final product. Months before an exhibition opens we meet to plan out any related online features. Since we’re a small team we often get developers or designers to help for bigger sites. For the Tim Burton exhibition, we worked with the Brooklyn company Big Spaceship, who built the site for our Contemporary Voices exhibition in 2005.

Having nearly broken my VHS copy of Beetlejuice from overuse while growing up, I knew the project would be an exciting one for a design firm to sink their teeth into. In the words of Big Spaceship, “Having the opportunity to work with MoMA for an artist as admirable as Tim Burton was amazing. The quality and imagination inherent to his art speak for themselves—we’re particularly inspired by his breadth of work and desire to experiment.”

One of the most exciting parts of the process is the concept meeting with the designers. After an initial meeting to discuss the exhibition, the crew from Big Spaceship put together three different directions for the site, and we sat down together with the curators to pick a design to build out. We asked them to talk about the three directions they proposed.