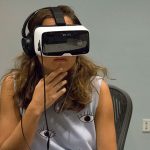 The New Virtual Reality: A Tool for Social Change

In 2014 MoMA added Google Cardboard to its design collection. Earlier this year the Department of Film organized Slithering Screens, which highlighted notable projects such as James George’s and Jonathan Minard’s documentary Clouds and Lynette Walworth’s virtual-reality film Collisions (2016). But aside from these forays into virtual reality, not much else has been organized at the Museum (or most other art museums) around the burgeoning technology.