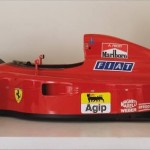 There’s nothing in the world like a really fast car, and the MoMA design collection has one of the world’s fastest: the 1990 Scuderia Ferrari Formula 1 High Performance Racing Car (641/2), by British auto designer John Barnard.

Though not a recent acquisition, I thought it fitting to feature the Ferrari now in honor of Fernando Alonso and Ferrari’s first podium of the 2014 Formula 1 season at the recent Chinese Grand Prix.

As designer John Barnard explains in an audio guide segment from the 2002 exhibition AUTObodies: speed, sport, transport, the 641, or F1-90, as it’s become known, was built for speed. And it delivered. Plus it’s red. Fiery red. Ferrari red, in fact. Red means danger, look out, hot stuff coming through; it’s the color of anger, passion, and seduction, and as everyone knows, red cars go faster.

Scuderia Ferrari has been part of Formula 1 since the beginning, so it’s no wonder that the racing team holds so many F1 records, including the most constructor and driver championships and most overall wins. Each Formula 1 team races two cars; in 1990  two world championship drivers, Alain Prost and Nigel Mansell, drove the 641 for Ferrari, combining for three pole positions, five fastest laps,  and six wins. As reigning champion, Prost’s was the number one car; and he came close to repeating—only to lose out to another world champion, his arch rival Aryton Senna.

The formula, or the overall guiding regulations of Formula 1, has changed over the years with countless modifications and improvements. And big changes came this year with the hybrid 1.6-litre V-6 turbo engine with ERS (Energy Recovery Systems), a major shift from the 2013 2.4-litre V-8. Overall design changes accompanied the new, greener 2014 engines, but likely the most notable and most talked about change is the new engine sound—or lack of it. Drivers have said they can hear the wind over the engine noise; used to be all you could hear was the engine.

The sound of the 1990 641 Ferrari 3.5-litre V-12 engine is familiar to race fans the world over. Like none other, it screams exhilaration, excitement, and pure power.

The world of Grand Prix motor racing is one of precision, with its rigorous formula, and exacting calculations; it’s a culture unto itself with a complicated set of rules and statistical systems of points and penalties spoken in a language of strange numbers and acronyms. But it’s the visceral experience of raw power, crazy kinetic energy, and speed of the cars that ignites our imagination—the remarkable talents and mad skills of drivers the draws us in. “Tutti i Motori Ferrari,” a catalogue of Ferrari engines designed by the Dutch graphic artist Irma Boom is also in MoMA’s design collection. Its soft, outer cover displays the Ferrari prancing horse logo on a silver-colored background that looks to be made of a fluid version of same the aluminum alloy used for F1 engine blocks; the interior plates showcase the evolution of the engines throughout Ferrari’s history. (A flip through of the pages of “Tutti I Motori Ferrari” begins at the one minute mark in the video “20 books by Irma Boom.”)

Before AUTObodies MoMA’s Ferrari 641-2 was first on view in the 1993 exhibition Designed for Speed: Three Automobiles by Ferrari. It can presently be found hanging on the wall in MoMA’s Lewis B. and Dorothy Cullman Education and Research Building lobby, like a perfect portrait of a high-performance machine.