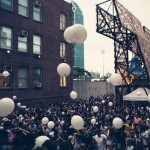 Warm Up 2013: It Just Keeps Getting Better This summer, week by week, artist by artist, Warm Up continues to outdo itself—and last weekend was no exception. It saw a DJ set from Brooklyn’s own Obey City; Fade to Mind Records’  vocalist, Kelela, performing a live set and singing with DJ L-VIS 1990 (who also turned in a stellar DJ set). 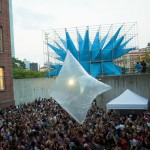 Last Saturday’s Warm Up—the second-to-last of the 2012 season—went down in superhero style.

After headliner James Holden called from LAX with the heartbreaking news that his flight would be delayed well past performance time, a flurry of phone calls, text messages, and e-mails went out from the Warm Up curator crew to find a last-minute substitute. 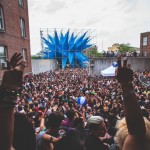 MoMA PS1’s Warm Up 2012 kicked off with Arca ft. HBA; Trust (Live); Nguzunguzu; Light Asylum (Live); and Todd Terry pulling in a huge crowd that was eager, despite the heat, to celebrate some amazing artists on opening day. 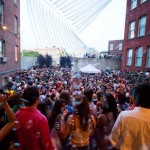 Warm Up 2012 Opening Day: Looking Back and Looking Ahead The more things stay the same, the more they change. That seems to be the maybe-not-by-accident design of this summer’s Warm Up lineup at MoMA PS1.

When we started as music curators here three years ago, we were part of a new committee that had been assembled by Eliza Ryan to help refocus MoMA PS1’s weekly summer events into something that more closely reflected the changing tastes and demographics of both the museum and New York City/Brooklyn.

Our team strove to uphold the tradition of dance music that was already a major part of these legendary six-hour Saturdays celebrations. But dance music has morphed into something new and different; the technology is different, the influences are different, and the kids are different. There can be room for hip-hop, UK garage, New Orleans bounce, techno, disco, and an increasing number of live acts that embrace both DJ culture and a DIY spirit.

The group did not initially debate about changing the venue or overhauling the structure of the day. That would remain the same as it ever was. (We did upgrade the sound dramatically; shout out to Jim Toth.)

The focus is far more about assembling lineups with musicians, DJs, and live bands who might never typically share a bill. It is about bringing artists in from beyond the five boroughs and reaching around the globe. The first season in 2010 saw us booking flights from Spain, the Netherlands, and Africa. This was exciting—we were definitely onto something unique, and watching the ecstatic crowds embrace the transitions and transformations of the day was incredible.

What started as six semi-familiar peers in a museum conference room, scrambling for a cohesive lineup at the very last minute, has by now turned into a close-knit group of friends. (Another shout out to newest member, MoMA PS1’s Imogene Strauss.) Given time, we seem to have developed a uniquely successful way to combine and complement diverse tastes into what looks to be the most exciting summer season yet.

This diversity is no better demonstrated than by the inaugural Warm Up 2012 event, this Saturday, July 7. The lineup runs a generational gamut, starting with a DJ set by Arca, the young Venezuelan producer responsible for contributing an epic four track EP of abstract dance production to the UNO label’s free digital-release series. Toronto’s TRST, a young duo riding a new dark wave of electronic music, mark the first live performance of the season and provide a compelling reason to arrive in head-to-toe black summer regalia.

Scheduled to perform at last year’s Warm Up but canceled due to the Hurricane Irene pandemonium, Nguzunguzu will make midday bounce with their brand of sun-baked Los Angeles bass music. Light Asylum, the NYC-based duo of Shannon Funchess and Bruno Coviello, have been on the road for the better part of the year supporting their self-titled debut album. The frenetic energy of Funchess in a live setting never fails to set the audience in motion; we’re stoked to have them back home, if even for a fleeting moment before they continue their electro-fied conquest around the world.

Legendary house DJ and producer Todd Terry is a true NYC institution. Terry’s magical production touch launched an endless stream of international dance-floor hits and remixes throughout the late 1980s and 1990s. Nothing feels like a more natural fit on the first day of Warm Up than a two-hour set of classic house music from Todd Terry.

So grab your tickets in advance</a>. That’s right, this is the first year that Warm Up tickets are being offered ahead of time. We’re stoked to see you at the first of many ecstatic events at MoMA PS1 this summer.</p>