How Do Black Lives Matter in MoMA’s Collection?

Less than a month after 49 people were killed and 53 wounded by a single gunman at a gay Latino party in Orlando, Florida, Alton Sterling and Philando Castile’s gruesome murders by police officers were captured on video and widely circulated. The two recordings of Sterling’s death were made by Abdullah Muflahi, a local store owner, and Arthur Reed, an activist, while Castile’s was made in a lucid, terrifying account by his girlfriend, Diamond Reynolds, under police duress as he died next to her. At least 5.4 million people have seen Reynolds’s video as of Saturday morning.

Documentation of violence against black people is nothing new: it has been disseminated through photography and video since the beginnings of both media. But the fact that the recent events were streamed instantaneously and made available for mass distribution on our handheld devices has galvanized a mass response, prompting protests throughout the country as Louisiana and Minnesota’s governors have sought a civil rights investigation from the Justice Department, and President Obama reminded the nation that “we’ve got some tough history and we haven’t gotten through all of that history yet.” And then on Thursday evening a sniper, who served in Afghanistan in the U.S. Army Reserve, killed five members of law enforcement during a Black Lives Matter protest in Dallas.

While The Guardian has documented 136 black victims of U.S. police killings since the beginning of 2016 alone, the recent fraught images have become a rallying cry for politicians, activists, and artists. Some have responded via social media and Instagram, posting images of the 1930s flag the NAACP would fly outside of its New York City office to publicly announce a lynching. These posts not only make a connection between this moment and the history of state violence against black people in the U.S. but are also meant to remind us of the organization’s anti-lynching pamphlet campaign that often redeployed lynching photographs to reclaim the power of image making as a tool to intervene against state violence. Others have posted the black monochrome square that has appeared repeatedly after police killings, as if to say there are in fact no images that can capture the scale of this crisis and that the image of the black body in pain is part and parcel of how black people are policed. In other words: Can images do anything but aggravate the problem?

At their best, pictures—on Instagram or at a museum—can offer a space of both meditation and change where anger, fear, and ambivalence can coexist. Sometimes artists respond to documents of death by giving you another option than either looking away or staring at the gore of your news feed. At other times, the significance of an artwork itself can change, especially when it enters a collection or institution. As it moves from the original place it was made, it takes on added meanings, rubbing up against other artworks and adding to our public image bank as new events occur and time passes. Here are three works—all recent additions to MoMA’s collection—by contemporary artists who have responded to anti-black racism over the past 50-plus years. 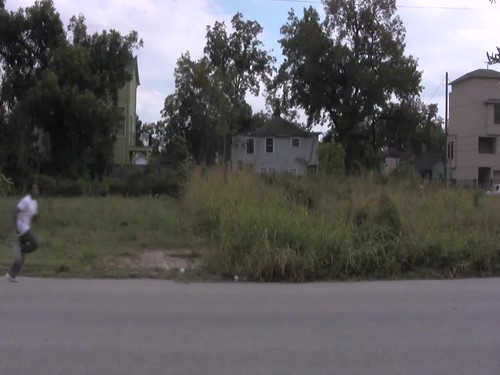 In Steffani Jemison’s 2010–11 video, Escaped Lunatic, a steady stream of black people run across the screen, sprinting, jumping and rolling through the streets of Houston. The video borrows its narrative structure from early 20th-century cinema—the chase genre in particular—which often depicted African Americans in scenes of flight from various forms of authority. Shooting the work with a Houston-based parkour team when she was living in that city, Jemison links a structure borrowed from early cinema to a contemporary scene, boldly linking the unjust conditions of urban life for black folks across time. Put simply: Jemison’s work reminds this viewer that black folks are perceived as fugitives whether they are running or just have their hands up.

As I recently rewatched the figures move across the pixelated image, it newly reminded me of the death of Israel Leija, the subject of another high-speed chase the year Jemison began her video. When Leija, the subject of a warrant for a misdemeanor probation violation, evaded arrest by car, authorities set up a spike strip to disable his highway escape. Despite the certainty of thwarting Leija, Texas state trooper Chagrin L. Mullenix nevertheless fired six shots, killing him, and afterwards proudly boasted “How’s that for proactive?” (Last month, in an unsigned opinion, the U.S. Supreme Court decided to overturn a circuit opinion, giving Mullenix immunity; Justice Sonia Sotomayor dissented in a statement that chastised the court.) While Jemison’s video depicts another black chase scene that seems inevitable, in her work one can imagine her figures’ flights as small escapes to a place out of view but no less real.

At 6 x 12 feet, Faith Ringgold’s 1967 American People Series #20: Die is a monumental painting—a document of its time as well as the long stay of the issues it depicts. The final work in a series inspired by a range of modern icons, including Pablo Picasso’s Guernica, Josef Albers’s abstract geometric murals, and Ad Reinhardt’s black monochrome paintings, Die represents a culmination in the artist’s search for what she called “a black aesthetic.”

A crimson bloodbath on a black-and-white checkered ground, the canvas depicts a riotous scene in which a slew of archetypical white and black men, women, and children are entangled in relationships built at once out of conflict and care. Curiously, only two subjects (one black, one white) hold weapons, yet everyone appears to be injured, implying that people on all sides of the color line are the potential victims of racial violence, which itself can take many forms. Outfitting her subjects in the business attire of the time, Ringgold’s picture suggests that racial tensions are not only the stuff of street warfare, but what we would today call microagressions—those daily, seemingly fleeting forms of verbal and behavioral discriminations that add up to create violent environments for people of color across all classes and segments of society. While the artist worried that Die would be a prophesy of her times, the work has proven to anticipate a far longer arc.

Let’s be clear about how Ringgold’s work resonates today: Just as the painting indicts all of the suit-and-dress-wearing, white-collar workers in her picture, we must implicate the professional institutions in which we find ourselves as part of a broader anti-black culture. Kerry James Marshall, known for his large-scale paintings of coal-colored black subjects at the club, in love, and enjoying some of the creature comforts of African American life, completed his Untitled (policeman) last year. In it, a black cop with a Chicago insignia on his hat sits on his squad car’s hood, underneath the nighttime lights of a parking lot. He stares into his own space and away from the viewer, with one hand on his hip and the other in his lap. At once authoritative and contemplative, resolute and undecided, he is not simply a type—for example, the black policeman as a contradictory symbol of power and powerlessness. Rather, Marshall portrays this policeman as an individual whose reflective countenance reveals a subject the artist describes as in the middle of thinking of the circumstances that he is in.

In watching the images of Dallas Police Chief David O. Brown holding his head in his hand during a prayer vigil on Friday, it was hard for me not to think of him as an avatar of Marshall’s rendering of a black man trying to fix an institution seen by many in this country to be structured by racism. Indeed, Brown—an African American and fourth-generation Dallas native who championed greater transparency by Dallas law enforcement before Michael Brown’s 2014 death—has his own complex personal history of police violence: He lost his former partner in the line of duty, his brother in a violent crime, and his son after he killed a police officer and another man.

But what do we do that goes beyond Brown’s public grief? What happens after Marshall’s policeman’s self-reflection? What is greater than the effects of this Museum’s acquisitions? I have a certain faith that Jemison’s image of flight and fugitivity, Ringgold’s sense of the banal pervasiveness of racial violence, and Marshall’s portrait of a vexed authority figure are not just scenes of contemplation. Maybe they will intervene into our visual languages, spawning our sense of social imagination. For example: Will Marshall’s officer get up from his car to unholster and give up the gun to which his right hand points—another black rectilinear monochrome at the horizon line of the car’s hood? Can we arrive at the nearby place to which Jemison’s subjects are fleeing one after the next? If these works offer anything in this moment of crisis, it is space in which we might be undone and welcome the unknown. Analyzing and acting beside one another, perhaps we’ll continue the good fight and pursue the hard love we need right now.