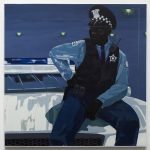 How Do Black Lives Matter in MoMA’s Collection?

Less than a month after 49 people were killed and 53 wounded by a single gunman at a gay Latino party in Orlando, Florida, Alton Sterling and Philando Castile’s gruesome murders by police officers were captured on video and widely circulated. The two recordings of Sterling’s death were made by Abdullah Muflahi, a local store owner, and Arthur Reed, an activist, while Castile’s was made in a lucid, terrifying account by his girlfriend, Diamond Reynolds, under police duress as he died next to her. At least 5.4 million people have seen Reynolds’s video as of Saturday morning.