“My piece Rainforest IV was developed from ideas I had as early as 1965…. An offer came, which didn’t get realized…I was asked to make a proposal for a park in Washington. The idea was to have a sounding outdoor sculpture, so my mind began turning around. I thought, ‘wouldn’t it be wonderful if each sculpture sounded completely different from the other and the whole could be run by one machine . . . .'” – David Tudor 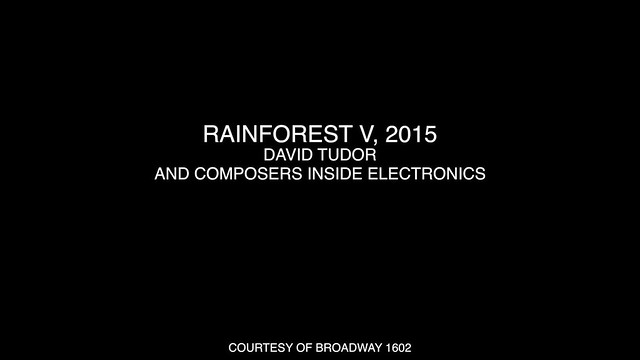 David Tudor’s Rainforest V (Variation 1) (1973–2015) is an ecosystem of objects that envelops you in sound. Chirping, croaking, clicking, or ringing, each sculpture speaks in its own voice, resonating back into the amplification system of the gallery space, joining the harmonious cacophony of the collective noise. According to Tudor, the concept for the piece grew out of a “dream-vision of an orchestra of loudspeakers, each speaker being as unique as any musical instrument.” This heterogeneous group of objects, constructed from a variety of materials, echoes the diversity of flora and fauna in the natural world, breathing and reverberating in constant commotion—a forest of sound. MoMA’s Department of Media and Performance Art recently acquired this immersive installation. Conceived by Tudor in 1973, this pivotal early electro-acoustic work was adapted in 2015 by his longtime collaborators, Composers Inside Electronics (CIE), into the version shown in the video above.

Born in 1926, Tudor was a pianist, composer, and early pioneer of live electronic music. The majority of his compositions utilize custom-built modular electronic instruments, innovations that positioned him at the forefront of postwar music technology. Over the course of his career he developed a rich network of collaborators, among them John Cage, whose chance-based compositions had a great impact on Tudor’s work. Tudor premiered several Cage piano works, including the landmark silent composition 4’33”, in which Tudor sat at the piano for precisely four minutes and 33 seconds without playing. During the 1950s and 1960s, Tudor taught at Black Mountain College in North Carolina, and composed for the Merce Cunningham Dance Company. He worked with several members of the artist and engineer collaborative Experiments in Art and Technology (E.A.T.), including founding members Robert Rauschenberg and Robert Whitman. (E.A.T. was founded in 1966 by Billy Klüver and Fred Waldhauer to encourage collaborations between artists and engineers at the forefront of new technology.) For the score, Tudor used tone oscillators that made bird-like sounds, but the work’s greatest innovation was his use of the resonant characteristics of ordinary objects to manipulate the sounds. Tudor drove sound through eight tabletop-sized objects and then re-amplified the result into the theater space.

While Tudor created a number of other iterations of Rainforest, the breakthrough moment occurred in 1973 with Rainforest IV, when the work expanded from a sonic composition to a collaborative installation. That summer, Tudor attended a workshop with a group of young artists and composers at a New Music festival in Chocorua, New Hampshire. This group—which included future members of CIE—suggested that he work with larger objects and suspend them freely in space to increase their resonant properties and add a visual element to the work. Over time, the number of objects grew from eight to 20 to 40, and each was selected for its distinct auditory properties. As Tudor explained in the original program notes, “Each instrument was set into sonic vibration through the use of electromagnetic transducers. The sound materials used to program the instruments are collected from natural scientific sources and are specific to each instrument, exciting their unique resonant characteristics. The excited resonances are routed to a conventional audio system by the use of one or more pick-ups attached to each instrument.”

The concepts and technical strategies in his work have influenced generations of artists and composers—including Alvin Lucier, Pauline Oliveros, Stephen Vitiello, and Kevin Beasley—who are represented in MoMA’s collection and performance programming. CIE continued performing this piece after Tudor’s death in 1996. In 2009, they created Rainforest V, the installation version of the work, which is now in MoMA’s collection. The Department of Media and Performance Art worked closely with CIE member John Driscoll during the acquisition process, and these efforts have transformed a work that was once activated by performers into an installation that “performs” itself. Rainforest V encapsulates the different generations of the piece, and its addition to the collection reaffirms MoMA’s commitment to cross-disciplinary artists and to composers who treat sound as a physical material.