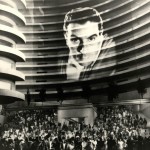 These notes accompany screenings of William Cameron Menzies’s </i>Things to Come on November 24 and 26 in Theater 3.</p>

I can’t deny that there may be a slight “guilty pleasures” element in my choice of Things to Come as part of this series. William Cameron Menzies (1896–1957), however, was a towering figure in the history of film, if not as a director, then as an art director. I would argue that he crossed the line into auteurism, even while working for major directors like Walsh, Dwan, Lubitsch, Borzage, Griffith, Hawks, and Hitchcock.