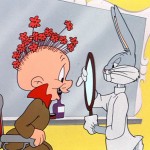 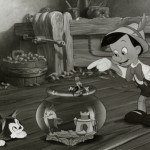 As this is being written, the number one film at the box office for the second straight week is an animated work, Hop, about the picaresque adventures of the long-eared heir to a chocolate bunny factory. Hopping out to see Hop is not high on my agenda (hopping of any kind has not been on my agenda at all since the five-minute “Bunny Hop” craze over a half-century ago), but there has been a proud relationship between bunnies and the cinema for a long time, from John Bunny (the silent clown) to Bunny Lake (Otto Preminger’s abducted little girl). And of course, we can never lavish enough praise on that 14-carrot genius, Bugs. 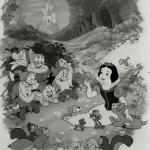 After excoriating contemporary Hollywood these past two weeks for its evident surrender to the forces of digitization, it may seem a little incongruous to be extolling the virtues of a film that, in its day, represented a kind of technological revolution of its own. No comparable challenge to the existing order in American narrative cinema would come along again until the advent of Star Wars some 40 years later. (I consider Stanley Kubrick’s 2001: A Space Odyssey [1968] to be more experimental than narrative.) The concept of a feature-length movie without human representation—and in Technicolor to boot—must have riled many traditionalists who had endured the innovation of sound only a decade earlier. Snow White and the Seven Dwarfs, which premiered during Christmas week in 1937, was the inevitable culmination of Walt Disney’s financial and artistic success.

Disney, Iwerks, and Fleischer in the 1930s

Last June we presented a brief survey of early animation in both America and Europe. On the continent, with the emergence of figures like Walter Ruttmann and Oskar Fischinger in Germany and (with the coming of sound) Len Lye in Britain, abstraction became the predominant form. Lotte Reiniger continued her silhouettes, eventually landing also in Britain. Ladislas Starevitch spent the first decade of the sound era working on the puppet feature Le Roman de Renard in France. These notes accompany the Early Animation program, June 2, 3, and 4 in Theater 2.

The art of film animation developed out of a long tradition of newspaper and magazine cartoonists both in Europe and the United States. The Frenchman, Emile Cohl (1857–1938), and the American, Winsor McCay (1871–1934), were politically tinged newspapermen who took advantage of the newly-invented concept of stop-motion photography, shooting a slightly varied drawing on each successive film frame. Although their work appears primitive beside Pixar technology, there must have been a sense of wonder and awe in early audiences who saw drawn figures come to a kind of life on the screen.