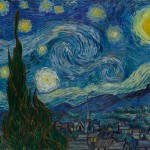 Shedding light on The Starry Night There is hardly an introduction that does Vincent van Gogh’s The Starry Night (1889) justice. It is one of the most recognizable and beloved artworks in the world, and for many MoMA visitors, it is the artwork to see—a celebrity perhaps signifying modern art itself. Yet despite its fame, few viewers are likely familiar with the story behind this unlikely masterpiece, one of the many nighttime paintings Van Gogh produced during his stay at a mental hospital in Saint-Rémy, in the south of France.

Now available for the iPad, MoMA’s One on One series offers a sustained meditation on The Starry Night by art historian Richard Thomson that sheds light on the painting and transports readers to the environment in which it was created. In Thomson’s engaging essay filled with vivid visual references and snippets of Van Gogh’s personal correspondences, readers can catch a glimpse of the artist’s complex inner workings and the thought processes that went into creating the nighttime scene. What’s more, Thomson examines the physical circumstances behind The Starry Night, taking readers to the actual place where Van Gogh focused his attentions to the night sky, and highlighting the artist’s technique and style. Thomson also considers other artwork that Van Gogh may have seen at the time, placing The Starry Night in a broader historical context.

For more on The Starry Night, visit the iBookstore to download a free sample, and check out the other One on One series book available for the iPad, Rousseau: The Dream, in which MoMA curator Ann Temkin illuminates Henri Rousseau’s last major painting. Screenshot of the Starry Night app

Instantly recognizable and an iconic image in our culture, Vincent van Gogh’s The Starry Night is a touchstone of modern art and one of the most beloved works in the Museum’s collection. It draws thousands of visitors every day who want to gaze at it, be instructed about it, and be photographed next to it—yet few viewers are familiar with the story behind this unlikely masterpiece, executed during a tumultuous period in the artist’s life.

MoMA Offsite: Where Did It Go?

In this column I have often discussed the efforts made by the Department of Painting and Sculpture to circulate works in our collection galleries as frequently as we can manage, thereby showing the broadest possible range of our extensive holdings. All of our works are historically significant in their own way; still, we do recognize that there are dedicated audiences for certain landmark acquisitions made by the Museum, and so there are a few works that remain on view indefinitely. Les Demoiselles D’Avignon (1907) by Pablo Picasso, The Starry Night (1889) by Vincent van Gogh, and Salvador Dalí’s The Persistence of Memory (1931) certainly all fall into this category.

The tragically unrequited love, the driving need to be accepted as a serious artist, the longing for success that never quite came (he sold only one painting during his lifetime)—most people are just as familiar with the story of Vincent van Gogh‘s life as they are with his art. Full of thick strokes and rich colors, van Gogh’s paintings express his passion and pathos. His many self-portraits show him to be sad or dispirited. Aware of his struggles, we are drawn into his paintings. The reality he captures is one we want to experience.