A special party for In the Making + MoMA Teens alumni will be taking place in the Louis B. & Dorothy Cullman Education and Research Center the night of Friday, December 14, with food, drink, raffle prizes, interactive art by Babycastles, a live musical performance by SUPERCUTE!, and a special screening of John Favreau’s Elf. For more information, e-mail teenprograms@moma.org. Spring 2013 In the Making course applications are available now. 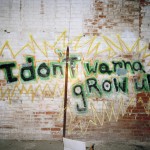 Sean Vegezzi, Artist and In the Making Alumnus

Sean Vegezzi is a 22-year-old alumnus of our In the Making program, which offers free art classes to NYC teens. Like many students attending public schools here in the city, Sean came to us as a high school student who was seeking an outlet for his creativity as well as a public platform to showcase his work.