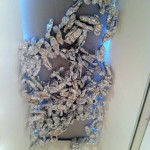 “Visitors are invited to take balloons that have floated to the ground.”

Now that’s a label you don’t typically see on the walls of a museum! Magi© Bullet (1992), by the Canadian artist’s group General Idea, is an installation of silver helium balloons that fills the ceiling of an exhibition space.