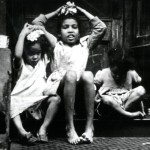 Cinematic New York street scenes date back to the very beginnings of the medium, in the 1890s.