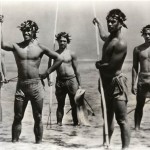 F. W. Murnau (1888–1931) made six or seven great or near-great films in his all-too-brief career. All save his last film were tightly controlled, studio-stylized works that (although they were beautiful and often moving) were thoroughly planned artifice. One might even use the contemporary expression “tight-assed” in describing them. His final film, Tabu (1931), however, seems almost the complete antithesis. Tabu is one of cinema’s simplest, most lyrical and masterful expressions of a despairing romanticism succumbing to the realities of a world from which none of us can escape.