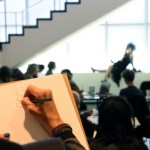 Sketching from Life: Drawing Sessions Inspired by The Paris of Toulouse-Lautrec Sketching from Life drawing sessions at MoMA inspired by The Paris of Toulouse-Lautrec: Prints and Posters. All photos by Manuel Molina Martagon. © 2015 The Museum of Modern Art, New York

In 2014, MoMA’s education, curatorial, graphic design, exhibition design, and marketing departments collaborated to develop an interactive learning space adjacent to the exhibition The Paris of Toulouse-Lautrec: Prints and Posters. This is the third interactive space we’ve developed in relation to an exhibition, following the success of Performing John Cage and the Polke Pop-Up Activity Space. This café-like space offers activities and resources to connect participants with Lautrec’s life and artistic process using both unfacilitated and facilitated approaches. 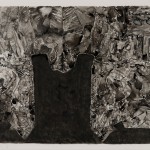 The Inscrutable Gestures of Jasper Johns 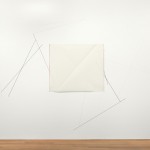 Dorothea Rockburne: Drawing Which Makes Itself I’ve been intrigued by Dorothea Rockburne’s wall drawing Neighbourhood (1973) since I began working at MoMA. It was acquired by the Museum in 1978, just five years after it was first made, but has been on view infrequently since then, and I really wanted to see it in person. 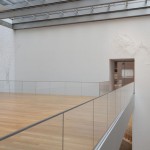 Last Chance to See Monika Grzymala and the exhibition On Line: Drawing Through the Twentieth Century

Monika Grzymala’s work always pushes the viewer—it forces us to question how we categorize artworks, what they’re made of, and where they can be installed. Monika has worked with adhesive tape, handmade washi paper, and a diverse range of other materials to create large scale drawings-in-space— works that are grounded in the idea of drawing and the artist’s direct engagement with materials, but that expand into three dimensions, filling and shaping the viewer’s own space. 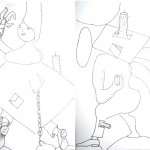 Don’t want to get squished in the crowds at MoMA while trying to sketch from your favorite work?  Feeling like you need some inspiration to get you back into drawing? Then this Five for Friday is for you.