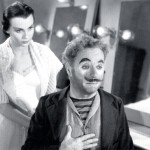 These notes accompany the screenings of Charles Chaplin’s Limelight on April 25, 26, and 27 in Theater 3.

If Charles Chaplin‘s Modern Times is a poignantly graceful valediction to the silent cinema, 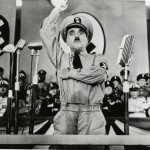 The Great Dictator presents unique problems for the historian trying to reconcile Bosley Crowther’s judgment in 1940 that Charles Chaplin’s movie was “perhaps the most significant film ever produced” with the film’s occasionally flawed execution of Chaplin’s grand and noble conception. Because Chaplin (1889–1977) was a universally recognized and beloved personality—whose famous moustache had been stolen by an equally well-known, but far less beloved, comedian-cum-tyrant—his film about Hitler became an event of worldwide consequence. 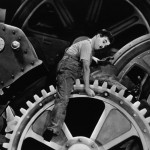 These notes accompany screenings of Charles Chaplin’s </i>Modern Times on November 30 and December 1 and 2 in Theater 3.</p>

If City Lights represents Charles Chaplin (1889–1977) at his romantic zenith, Modern Times most admirably displays his prescient satirical gifts. The relationship he began in the early 1930s with Paulette Goddard, which culminated in a secret marriage in China, began to relieve his obsessive loneliness and self-absorption. This, together with extensive travels through Europe and Asia, caused him to turn outward and consider problems beyond the personal. 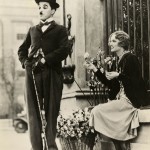 City Lights is Charles Chaplin’s most perfectly accomplished and balanced work. It would certainly be on the short list of films with which I would care to be stranded on a desert island.

By 1931 the silent cinema was effectively dead. It took considerable courage to lavish two years of rather expensive production on a silent film (and even more courage with Modern Times five years later), but Chaplin felt he had very little choice. He correctly perceived that the Tramp would lose his poetry and grace if he were coerced into the leveling mundanity of human speech. He foresaw that sound would force him to sacrifice the “pace and tempo” he had so laboriously perfected. 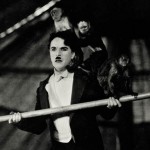 The Circus. 1928. USA. Directed and written by Charles Chaplin

These notes accompany screenings of Charles Chaplin’s The Circus, June 9, 10, and 11 in Theater 3.

With the possible exception of his own 1952 film Limelight, Charles Chaplin’s The Circus (1928) is the most personal and self-revelatory film ever made by a major director. Chaplin (1889–1977) made more than seventy shorts between 1914 and 1923, passing through several studios before the establishment of his own. 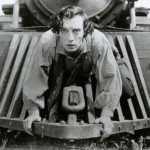 These notes accompany the Buster’s Best program, which screens on March 17, 18, and 19 in Theater 3.

The career of Buster Keaton (1895–1966) is both one of the cinema’s glories and one of its greatest tragedies. If one measures auteurism by a director’s ability to visualize an alternative personal universe on film, then Keaton ranks near the top. Buster’s vision of a world where machinery and Nature perpetually challenge human ingenuity and survival is made credible by his uniquely precise mastery of both the mechanics of his art form and the musculature of his own body—and his establishment of a link between the two. In a sense, he was a bionic man a half-century before Lee Majors. These notes accompany the program Buster’s Planet, which screens on January 27, 28, and 29 in Theater 3.

Joseph Francis “Buster” Keaton (1895–1966) began appearing in his family’s vaudeville act at the age of three. Charles Chaplin made his first stage appearance at five. Psychologists can have—and have had—a field day tracing all kinds of problems to this lack of an ordinary childhood in the cinema’s two greatest comedy stars. The simple fact, perhaps, is that they loved to perform and make people laugh. Buster, whose nickname has been attributed to Harry Houdini, followed in Charlie’s footsteps, entering films in 1917 (four years later than Chaplin) under the tutelage of Roscoe “Fatty” Arbuckle. These notes accompany The Chaplin Revue, which screens on January 20, 21, and 22 in Theater 3.

I’ve written more about Charles Chaplin than about any other filmmaker (including the book Charles Chaplin: An Appreciation, published by MoMA in 1989), and I’m not exactly sure where to begin now. Certainly, he is the auteur’s auteur, having had more freedom than any other director to visualize on celluloid what he dreamed and imagined. This was the lucky consequence of being the most famous artist in the world, allowing him to purchase his own studio, rehearse endlessly, and save for his audience only that which he considered to be up to his standards. The great Jean Renoir said: “The master of masters, the film-maker of film-makers, for me is still Charlie Chaplin…Clifford Odets telephoned that he wanted us to meet the Chaplins. It was like inviting a devout Christian to meet God in person.” Rene Clair said that Chaplin was so “profoundly original” that he had little direct influence on the cinema, but that without Chaplin, “we would not have been altogether the same people we are today.” I share many of these feelings.

Send in the Clowns

These notes accompany the program Send in the Clowns, screening on December 23 and 24 in Theater 3.

While this is intended as a fun holiday program, a few comments might be in order. First, I should acknowledge my personal prejudice against slapstick. I have felt that Charles Chaplin and Buster Keaton rose to the heights of screen comedy by distancing themselves from their Sennett/Normand/Arbuckle roots. I know this hurts colleagues like our estimable pianist Ben Model and other friends, but the philosophy of “anything for a laugh” (evident also in most of Mel Brooks’s work and the early films of Woody Allen) seems incongruous to me, if we are talking about “ART.” I won’t even dignify The Three Stooges or Abbott and Costello (there go my other friends) with a mention. (So kindly disregard that mention.) Seriously, though, I have always sought out some logical structure, character development, or visual invention in determining the worthiness of a film. This doesn’t mean that I am incapable of laughing at silly antics, and I fully acknowledge that some of Keaton’s (The General, Steamboat Bill, Jr.) and Chaplin’s (Monsieur Verdoux, Limelight) greatest works can sometimes be painfully unfunny, but there is an imaginary line in what’s left of my brain that makes me distinguish between entertainment for its own sake and art. However, I don’t wish to rain on your parade or your holiday spirit. If nothing else, this program attempts to establish a lineage that eventually leads to greatness.