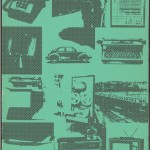 Historically, museums have played an active role in civic life by cultivating dialogue and prompting action around critical issues, at times creating impossible diplomatic bridges even in the midst of long-standing international conflicts.