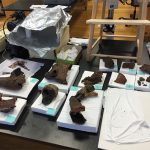 In the summer of 2014 the Department of Painting and Sculpture approached sculpture conservation to inquire if Bruce Conner’s work CHILD could be restored. CHILD was created in 1959 as a response to the sentencing of death-row inmate Caryl Chessman who had been incarcerated for the kidnapping and sexual molestation of a woman in Los Angeles. Conner responded to this high-profile capital punishment case and his visceral repulsion to it by creating a frightening sculpture of a deformed corpse-like child. Made from casting wax, the figure appears strapped to a wooden highchair with belt and twine, the head tilted backwards with a gaping or screaming mouth, and body veiled in torn and stretched nylon stockings.