A Van Gogh Pilgrimage on the 125th Anniversary of His Death

July 29, 2015, is the 125th anniversary of Vincent van Gogh’s death. This past spring I fulfilled one of my lifelong dreams by taking a trip to Europe to follow in Van Gogh’s footsteps. As a teenager I checked out every library book about Van Gogh, and eventually read the unabridged three-volume set of letters he wrote to his brother, Theo. With so much time having passed, I was eager to see if anything from Van Gogh’s time had survived. 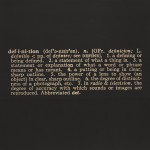 Five for Friday: How Is This Art? or, What I Learned from Conceptual Art

When you visit a modern art museum it can be easy to find yourself looking at a blank white canvas or a pile of bricks and wonder, “How is this art? Shouldn’t art be about something?” The problem of appreciating art is not limited to casual viewers. As an artist and employee at MoMA, I too can find it tough to relate to certain artworks. But the good news is that we can do more than just throw up our hands and ask for our money back. With a bit of imagination, we can make up our own ideas about an artwork and those stories may end up having more meaning to us than any art historical analysis.