As I’ve been going through the architectural models in Frank Lloyd Wright’s Archive—in preparation for future display—I’ve seen all kinds of condition problems, from acidified paper, to warped and crushed elements, to losses and detachments. But this is not too surprising. Unlike more traditional museum objects like bronze sculptures or oil paintings, architectural models are utilitarian: they exist to articulate a design. Thus, their materials are more often selected for expediency than for longevity. The painted wood and paperboard model for St. Mark’s-in-the-Bouwerie Towers represents one of three apartment buildings Wright planned to build around St. Mark’s Church in New York’s East Village. Of the 19 models in the Archive, St. Mark’s Tower is undoubtedly in the worst condition; it has suffered just about every kind of damage I’ve seen among the models. It arrived acidified and embrittled, with approximately 50% of its exterior missing, its floors warped and separating, its wooden base and finial exhibiting large jagged losses, and every surface covered with an accumulation of dirt, cobwebs, and mouse droppings (see images below). Loss to wooden base Soiled floor of an apartment unit The St. Mark’s Tower model is arguably one of the most important models in the Archive. Had the project been realized in the early 1930s, it would have been Wright’s first skyscraper in New York City, and the first building in that metropolis with an all-glass exterior (beating out the Lever House and United Nations building by 20 years!). Though St. Mark’s Tower was never built, Wright exhibited the model frequently, into the early 1950s. (Price Tower, a later version of this building, the model for which is also included in the Archive, was built 20 years later in Bartlesville, Oklahoma.)


When loss to an object is as severe as it is to this model, conventional restoration techniques are brought into question: to introduce so much 21st-century material to an object from the early 20th century raises issues of originality and authenticity. In consultation with curators, a range of options were considered, from leaving the model incomplete and damaged, to restoring it entirely, to fabricating a whole new model. To strike a balance between restoring Wright’s vision and respecting the history of the object, we decided to restore it partially, leaving a quarter of it in its damaged state. From a specific angle, the model will look completely restored, but the unrestored portion will present primary evidence of the extent of the model’s loss and retain its material history. I will use materials in the restored sections that can be distinguished from the original, making the restorations reversible so that future generations can undo the additions if they so decide.

After extensive vacuuming and surface cleaning, the paperboard elements needed to be consolidated and reformed. For this task, I benefited from the expertise of our paper conservators, who advised me to use a combination of moisture, pressure, wheat-starch paste, and time to manipulate the model’s floors back into plane.

Replacement parts were cut from acid-free matboard. The thicker elements, such as the vertical window casings, were cut by hand. Creating these elements, which are repeated 468 times over the model, made for monotonous but meditative work (not unlike that undertaken in Wright’s studio, some 80 years ago). But I’ve been fortunate to work on this at a moment when it’s possible to also take advantage of new, time-saving technologies, like laser cutting, which was employed to cut the thinner elements such as the window mullions, and ink-jet printing, which I used to replicate repeated, hand-drawn pencil designs found on existing exterior walls. After painting these parts with acrylic paint, I attached them to the model with a water-resoluble adhesive and a clamping system of cotton string loops. I then applied the designs, printed on mulberry paper, which become transparent when saturated with adhesive.

This process has taken over 450 hours, 60 of which are condensed in this time-lapse video: 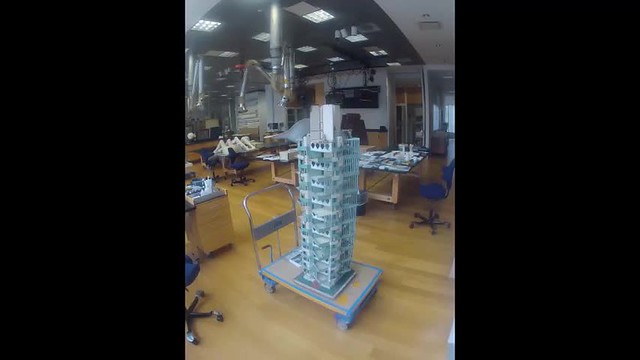 Now nearing completion, the restored model looks less like a ruin and more like an idea. In 2017, it will be exhibited for the first time in over half a century, allowing today’s visitors to gain insight into both Wright’s groundbreaking innovation and his working process. New Yorkers in particular may enjoy imagining how a trio of towering glassy structures would have transformed the landscape of the downtown lowlands. Left: Before treatment; Right: During treatment