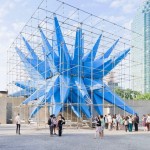 Our project for the MoMA PS1 Young Architects Program is about redefining the boundaries of architecture. It is a proactive participant in the city’s ecology thanks to a skin that collects NO2 from the air—to the equivalent of taking 260 cars off of the road. 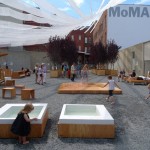 Checking in on Holding Pattern We thought it might be a good time to check in on Holding Pattern, our project for the 2011 Young Architects Program. Holding Pattern was deinstalled from the MoMA PS1 courtyard four months ago, but the deinstallation didn’t mark the end of the project—just the start of its second phase. 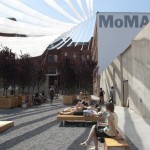 Each year, MoMA renews its commitment to experimental architecture and architectural display with a full-scale installation of a project chosen from a competition among virtually untried architects. In the galleries of the Museum, architecture collection masterworks and temporary exhibitions of computer- and hand-drawn architectural renderings, models, photographs, and films are regularly shown. But each year the outdoor spaces of MoMA PS1 provide a unique temporary outdoor gallery where emerging talents can turn projects and drawings into spaces and palpable experiences. 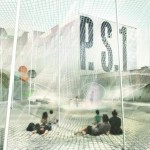 Every summer weekend, thousands of people pour into MoMA PS1’s courtyard to enjoy the best in art, architecture, and music during the weekly Warm Up parties. As the winner of this year’s Young Architects Program competition, which provides the setting for Warm Up, we took the opportunity to further contemporary explorations of architecture’s potential to create sensory-charged environments, rather than finite forms.

From a Grand Finale to the Next Phase

With a grand finale—attendees filled the room and spilled out into the hall—the five teams presented their final designs to the public at P.S.1 on January 9. As the teams now begin producing materials for the upcoming exhibition at MoMA (and the MoMA team begins preparing the space and the explanatory glue around the project), Rising Currents enters a new phase. Over the next few weeks a number of expert guest bloggers will add their perspectives on an experiment that challenges both the city as we have inherited it and the format of an architectural exhibition in an art museum. The quality of design, innovation, and intense teamwork that has characterized the last two months at P.S.1 has been nothing short of remarkable. The level of interest from city, state, and federal officials has been deeply encouraging and the surge of interest from the public has been spectacular. This week a jury will convene at P.S.1 to pick the finalists for the eleventh annual Young Architects Program (YAP). YAP is an integral part of our department’s programming and while the Rising Currents project is similar in some ways, it is worth noting that it is a true innovation for MoMA and P.S.1, and we believe in some respects, for architecture museums in general.