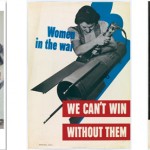 “Women in the War. We Can’t Win Without Them”

Posted by Juliet Kinchin, Curator, Department of Architecture and Design Right now the U.S. military is preparing to allow women to serve in combat roles for the first time, and pressure is growing from international precedent for the U.K. to follow suit. Yet there are still many who feel that the frontline is just not a place fit for a woman. Such a prospect was certainly out of the question a century ago during World War I.