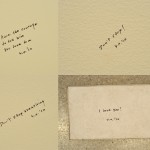 From a Whisper to a Scream: Following Yoko Ono’s Instructions I first heard about Yoko Ono’s so-called “instruction pieces” as a high school student, when a friend told me the (possibly apocryphal, certainly embellished) story of Ono’s first meeting with John Lennon. History according to the poorly fact-checked lunchtime ramblings of rock ‘n’ roll–obsessed seventeen-year-olds: During a visit to London’s Indica Gallery in 1966, Lennon encountered Ono’s Ceiling Painting. Climbing to the top of a tall, white ladder, he used a magnifying glass dangling from a thread to read a message printed in tiny letters on the ceiling: “YES.” Profoundly moved by the work’s unalloyed positivity, he demanded to meet the artist right away.