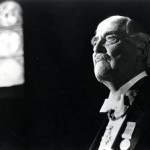 Once upon a time (May 5, 1995), a critic for our most distinguished newspaper wrote an article that has stuck in my craw for nearly two decades. An Auteurist History of Film: "The Scandinavian Connection"

Charles Silver, a curator in MoMA’s Department of Film, presents a series of writings to supplement the film exhibition An Auteurist History of Film. The following post accompanies the "The Scandinavian Connection" program, which screens on October 21, 22, and 23 in Theater 3.

Although Urban Gad (1879–1947) made a few films in Germany in the 1920s, during the golden age of Expressionism, his career had petered out by 1927. He clearly was not playing in the same league as Murnau, Lang, Pabst, Leni, Wiene, etc., and though an argument could be made that he anticipated some trends in Expressionism and that his use of eroticism was ahead of his time, his most significant contribution was the discovery of Asta Nielsen (1883–1972). Working in Germany, mostly with her then-husband Gad, Die Asta developed a restrained style of film acting, comparable to American counterparts like Lillian Gish and Mae Marsh. (To fully appreciate the achievement of these women, one should check out the staginess of Sarah Bernhardt’s film appearances from this period, although an elderly Eleanora Duse in Cenere managed quite well.) The actress performed Strindberg, Ibsen, Wedekind, and a cross-dressing Hamlet, but her most familiar role to Museum audiences would be in G. W. Pabst’s The Joyless Street (1925), the film that precipitated Greta Garbo’s coming to America. After appearing in just one talkie, she began a forty-year retirement (later to be topped by Garbo’s half-century “reclusion”), but it should be noted that at the age of seventy she undertook a second career, becoming a gifted collagist.