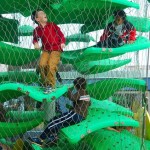 The name Luckey invites wordplay too tempting to avoid; in the case of Tom Luckey, a Yale-educated architect known for the kind of lofty play structures shown above, the children who ascend his Luckey Climbers could be called just that.