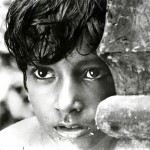 These notes accompany screenings of Satyajit Ray’s Pather Panchali on November 14, 15, and 16 in Theater 2.

“Third World” cinema was pretty much nonexistent for Western audiences until the 1950s. In 1951, with Akira Kurosawa’s Rashomon, Japanese films began to appear on a very limited basis.