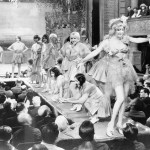 These notes accompany screenings of Rouben Mamoulian’s Applause, July 7, 8, and 9 in Theater 3.

Rouben Mamoulian’s (1898–1987) career as a film director showed potential for five years, before limping into a disappointing second act and then virtually disappearing. He was a promising newcomer like George Cukor—another of the many imports from the Broadway stage who turned to film around the advent of sound technology—but unlike Cukor, whose career lasted more than a half-century, Mamoulian never quite figured out how to survive and thrive within the Hollywood system. The great success of his stage production of Porgy in New York made him and everyone else think he was notably inventive, but his cinematic gifts proved limited and transitory.