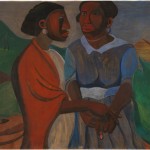 A Homecoming for Romare Bearden’s The Visitation Before Romare Bearden turned to the medium of collage in 1964—the multilayered compositions, for which he is best known—he was steeped in the language of drawing and painting. The Visitation (1941) (now on view in the exhibition One-Way Ticket: Jacob Lawrence’s Migration Series and Other Visions of the Great Movement North) exemplifies a critical early moment in the development of an artist who would become a leading voice in the cultural life of Harlem and in the history of American art. Recently acquired by MoMA, The Visitation returns to the Museum’s galleries for the first time since the 1971 retrospective Romare Bearden: The Prevalence of Ritual.