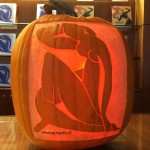 For the fourth year running, MoMA visitors who pass through the Museum’s film entrance during the days leading up to Halloween are treated to an iconic modern-art masterpiece—in seasonally appropriate pumpkin form. This year, in celebration of the Henri Matisse: The Cut-Outs exhibition, the knife-wielding crazies at Maniac Pumpkin Carvers have “cut out” a beautiful interpretation of Matisse’s Blue Nude. 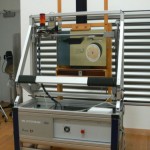 As indicated in the previous posts in this series, MoMA paintings conservators and conservation scientists have been studying five Magritte paintings for the past two years in preparation for Magritte: The Mystery of the Ordinary, 1926–1938. 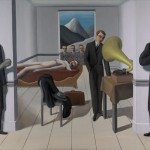 As indicated in the previous posts in this series, MoMA paintings conservators Cindy Albertson, Anny Aviram, and Michael Duffy have been studying five Magritte paintings for the past two years in preparation for Magritte: The Mystery of the Ordinary, 1926–1938. 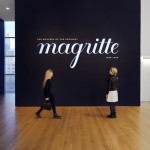 Title wall of Magritte: The Mystery of the Ordinary, 1926–1938 at The Museum of Modern Art. Photo: Martin Seck

For most graphic designers, typography is one of the most important, challenging, and seductive parts of graphic design. So when Anne Umland, The Blanchette Hooker Rockefeller Curator of Painting and Sculpture, and curatorial assistant Danielle Johnson, who organized the exhibition Magritte: The Mystery of the Ordinary,1926–1938, suggested incorporating Magritte’s beautiful lettering style—or a version inspired by it—for the title wall design, I was, of course, very excited. I began my work on the project by researching and gathering samples of where Magritte’s lettering appeared, such as in his paintings La Trahison des images (The Treachery of Images), L’Apparition (The Apparition),</a> and Le Masque vide (The Empty Mask). There were many variations from one artwork to another: some had greater contrast of thick and thin, others were more condensed, and there were perceptible shifts in stroke weight—largely due to the proportion of sizes between the brush and the letters he was drawing. Yet, it surprised me to see how incredibly consistent his letterforms were. The letter “p,” for example, the most notably unique character in his alphabet, always had an open counter, and looked like an “n” with a prolonged stem. The end of the letter “s” consistently looped inwards into a soft twirl that finished with a small, delicate node. Detail of the letters “p” and “s” from a Magritte painting

To say that my first attempts were not quite there is an understatement. It took dozens of variations, testing, tweaks, and just plain old graphic designer obsession to get it to a point that felt right and captured the elegant, rhythmic, and gestural quality of Magritte’s original lettering. When I got stuck on how to resolve a particular transition between letters—for example, between the “B” and “r” in Brussels—I would go back to my research and sure enough, Magritte was there to give me a helping hand. Detail of the letters “b” and “r” from a Magritte painting

My finished lettering is used in five places throughout the exhibition. Taken out of it’s familiar context in Magritte’s paintings, it now functions as signage that both guides visitors through the galleries and draws them in. 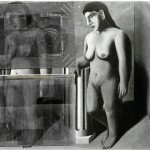 The Discovery of Magritte’s The Enchanted Pose

As indicated in the previous post in this series, MoMA paintings conservators Cindy Albertson, Anny Aviram, and Michael Duffy have been studying five Magritte paintings for the past two years in preparation for Magritte: The Mystery of the Ordinary 1926–1938. 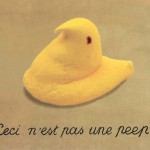 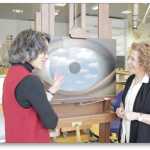 Revealing the Mystery of Magritte’s Materials and Techniques From left to right: Conservators Michael Duffy, Anny Aviram, and Cindy Albertson, and Curator Anne Umland in MoMA’s paintings conservation lab with René Magritte’s The False Mirror; The Palace of Curtains, III; and The Portrait

In his polemical 1938 speech “La Ligne de vie (Lifeline),” René Magritte spoke of his “objective representation of objects,” claiming that, “In my view, this detached way of representing things is characteristic of a universal style in which the manias and minor preferences of the individual no longer play any part.”