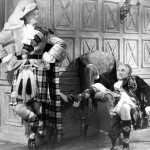 Whenever I am on a Metro North train, barreling along the Hudson River north of New York City, I try to sit on the river side of the car in order to get a good look at Bannerman’s Castle. Perhaps you, too, have been intrigued by the carcass of what appears to be a red brick castle fallen into decay, about 1,000 feet from the shoreline on the six-acre Pollepel Island. Having just watched René Clair’s The Ghost Goes West, I couldn’t help but think of the decrepit, battered ruin. 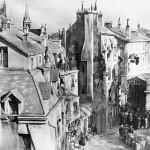 René Clair’s Under the Roofs of Paris Under the Roofs of Paris. 1930. France. Directed by René Clair

René Clair (1898–1981), a disappointed poet, novelist, and actor, lived and worked on the fringes of the French Surrealist movement in the 1920s. (We included his Entr’acte (1924) in the French Avant-Garde program earlier in the series.) In total, he made eight silent films of varied lengths—most notably 1927’s Un Chapeau de Paille d’Italie (The Italian Straw Hat)—establishing a reputation for humor and fanciful imagination.