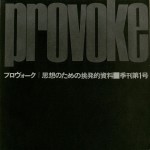 Provoke (Purovōku) was an experimental magazine founded by photographers Yutaka Takanashi and Takuma Nakahira, critic Koji Taki, and writer Takahiko Okada in 1968. The magazine’s subtitle read as: shisō no tame no chōhatsuteki shiryō (Provocative documents for the sake of thought). Photographer Daido Moriyama is most often associated with the publication, but Moriyama did not join the magazine until the second issue.