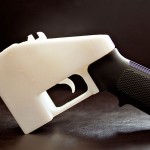 Can design mitigate or eliminate the inherent violence of the slaughterhouse? Can and should the experience of pain transcend gender boundaries? Should design production be normalized to the extent that we are able to print weapons from the comfort of our own home? Design and Violence is an online curatorial experiment I’ve co-organized with Jamer Hunt, director of the MFA program in transdisciplinary design at Parsons The New School for Design, and Kate Carmody, Curatorial Assistant and Michelle Fisher, Exhibition Coordinator, both in the Department Architecture and Design at MoMA. Since fall 2013, the project’s website has hosted a weekly series of posts that, we hope, challenge established discourses of contemporary design and provoke new discussions through an open forum. The questions above are just some the project has offered up for online discussion and dissemination.

On March 27, and April 10 and 17, we’re bringing this discussion into the physical world through three debates staged at The Museum of Modern Art. Each debate will center on a provocative project featured on the Design and Violence site. We hope the series will offer a way for audiences to truly and deeply engage with thought-provoking issues contemporary society grapples with through design. We want to hear voices raised alongside issues, and to offer a public event that goes beyond the traditional panel format.

Too often, and naïvely, we only celebrate the positive impact that design artifacts have on the world. However, design also has a history of violence that, unless linked overtly to political and social suppression and upheaval, often goes unexplored. Humanity continuously changes and adapts. Considering the pace of innovation and creative disruption, designers’ responsibility for this legacy is heavy. Violence—defined as the manifestation of the power to alter the circumstances around us, against the will of others and to their detriment—needs to be explored and grappled with. With the Design and Violence project, we intend to present thoughtful, incisive, provocative, and intellectually elegant case studies that will spark discussion and bring this issue to center stage for designers and for the people they serve—all of us.

Jamer and I began this project online in an effort to bring a conversation we think matters to as broad an audience as possible. Violence has always been part of the human condition—perhaps even a prerequisite for an evolutionary process that favors the survival of the fittest. In the post-2001 era, however, at least in the U.S., violence pervades our experiences in a new way. It has become so large a part of media feeds and daily life for many that it is a shared shadow over our collective humanity, but is also under threat of a certain invisibility because of its quotidian nature. To do justice to the complexity of this topic and to understand the impact of violence from many angles, we have selected a range of design case studies that in some way—speculatively, obviously, ambiguously—intersect with violence. As the designs our site has foregrounded show, violence is not only the logical preserve of box-cutters and bullets. Violence is, arguably, part of our biological design in our carnivorous teeth; the natural violence of a bee’s sting or fungal digestion may be co-opted; and violence may be visualized and mapped or captured in scent. Each week, we invite one expert, from fields as diverse as science, philosophy, literature, music, film, journalism, and politics, to respond to one object we have chosen. Arianna Huffington responded to James Bridle’s drone shadows; architect Ayssar Arida responded to artist and gamer Vincent Ocasla’s Magnasanti, a dystopian SimCity breaking at the seams due to overpopulation, overuse, and over-development; John Thackara’s repudiation of Michael Burton and Michiko Nitta’s Republic of Salivation provoked a heated and passionate debate over the place of speculative and critical design practices in our project, and in the wider landscape of contemporary design and society; and Gillian Tett responded to Jonathan Jarvis’s visualization of the violence the credit crisis wreaked globally. In the coming months, we’ll be tackling prison design, rodent control, designs for public health, and riot gear, and look forward to equally fiery conversations. The debates this spring will center upon the 3-D printed gun, The Liberator; Sputniko!’s Menstruation Machine; and Temple Grandin’s serpentine ramp. Debate motions will be delivered by speakers who are directly engaged in issues germane to these contemporary designs—the Liberator’s designer Cody Wilson; Chris Bobel, author of New Blood: Third-Wave Feminism and the Politics of Menstruation, and distinguished professor of law Gary Francione, to name a few. We want them—and you—to explore the the limits of gun laws and rights, the democracy of open-source design, the (im)possibility of humane slaughter, and design that supports transgender empathy.

Join us this spring for three conversations that we can’t promise will be easy, but we are certain you would benefit from. 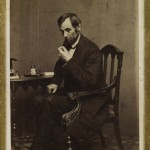 During this election season, it’s hard to imagine a time when photographs—let alone television, the Internet, and social media—did not play a central role in presidential campaigns.