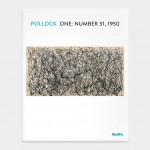 Considering One, Once More

If you’ve been following the Jackson Pollock Conservation Project on Inside/Out, you know that Jackson Pollock’s monumental painting One: Number 31, 1950 underwent some changes in our Department of Conservation this past spring after conservators discovered sections of overpaint on its surface, vestiges of a restoration campaign from the 1960s. You can follow the entire process here. Cover of the publication Pollock: One: Number 31, 1950, published by The Museum of Modern Art

The newest book in our One on One Series, Pollock: One: Number 31, 1950, also examines the history of this specific painting, but in an entirely different way. Author Charles Stuckey’s essay begins its investigation before the painting’s inception and follows it to the present day, considering its legacy and influence, which is visible in numerous contemporary artworks included in the book. In the late 1940s, Pollock began experimenting with a new method of painting, “drip painting” as it came to be known, where he would stand above a vast unframed piece of canvas and render kinetically: flinging, flicking, and, of course, dripping colors onto the canvas with various implements.

Pollock’s method eschewed the conventional notions of painting of the time, opting for raw, unstretched canvas and housepaint over prepared canvas and traditional oils, and darting around the floor of his barn studio rather than working quietly with a palette and easel. One: Number 31, 1950 is a masterful example of this signature style, a monumental work displaying Pollock’s energy and dexterity.

Drawing from period magazine articles and quotes by Pollock, Lee Krasner, critics, and friends, Stuckey offers a narrative trajectory for the famed painting, following One: Number 31, 1950 from its premiere exhibition, to a stint in an apartment on Central Park West, to its final place in the collection of The Museum of Modern Art. 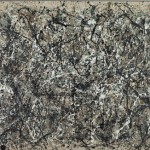 A meeting between conservators and curators to view One: Number 31, 1950 as Pollock would have during its creation: laid horizontally

Throughout the project, we’ve been working closely with curators in MoMA’s Department of Painting and Sculpture, and this exchange of ideas surrounding Pollock has enriched and informed the treatment process. During one such meeting, we took advantage of the opportunity to view One: Number 31,1950 as Pollock saw it during its inception: laid horizontally. 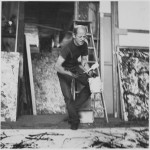 Jackson Pollock at work in his studio, 1950. Photo: Hans Namuth

In the May 1951 issue of ARTnews a selection of photographs by Hans Namuth appeared as illustrations for Robert Goodnough’s article, “Pollock Paints a Picture.” The images depict a focused  Pollock energetically applying paint to a large canvas spread across his studio floor. 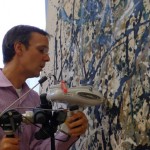 Empirical examination and scientific analysis are fundamental to conservation research and treatment; conservators frequently collaborate with scientists in order to clarify specific questions: to identify materials, elucidate degradation mechanisms, or test the efficacy of conservation methods. 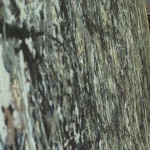 In our last post, we took a closer look at the variety of visual effects Pollock was able to achieve with his painting technique. We also observed some passages of paint that don’t appear to fit the typical characteristics of poured house paint. So we set out to investigate this seeming inconsistency. 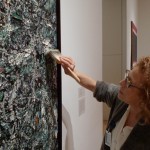 It’s a good time to be studying and working on Jackson Pollock’s paintings. With projects also underway at the Seattle Art Museum and  The J. Paul Getty Museum 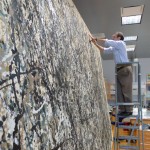 We covered a lot of territory in our last post, documenting Echo’s condition and treating the discolored canvas. Our efforts have produced satisfying results. 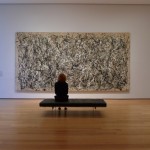 Where Is One? MoMA’s Jackson Pollock Conservation Project Recent visitors to The Museum of Modern Art may have found themselves wandering through the Painting and Sculpture Galleries unable to shake the sense that something is awry.