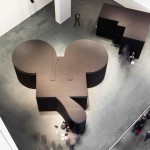 There are people sighing in the Mouse Museum. They are moaning, clucking, and cooing, too.(1) There’s no telling which objects elicit which murmured reaction, since part of Mouse Museum’s potency derives from affinities between things