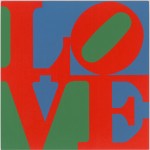 From the Archives: Holiday Cards from MoMA Robert Indiana’s LOVE (1965) is one of many holiday cards commissioned by The Junior Council of the Museum. The image subsequently became well-known in various other contexts. © 2015 Morgan Art Foundation Ltd./Artists Rights Society (ARS), New York

The Museum of Modern Art’s Christmas card program was initiated in 1954 by the Museum’s Junior Council. The Junior Council, an affiliate group, had been founded five years earlier “to bring together a group of younger people who have a common interest in the arts and a desire to see them fostered soundly and liberally in this country.” 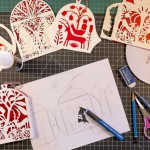 This weekend multimedia artist Elsa Mora, who designed one of MoMA’s signature holiday cards this year, will bring her incredible cut-paper creations to the MoMA Design Store in Soho. Shoppers, creatives, and art aficionados alike can stop by to see her work come to life, and meet with Mora in person.