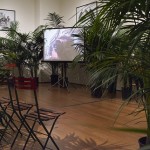 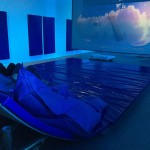 A visitor to MoMA’s current Marcel Broodthaers: A Retrospective exhibition must traverse a sea of potted palms to enter the galleries. The palms, along with a series of prints hanging on the surrounding walls, comprise a work entitled L’entrée de l’exposition (The entry to the exhibition). 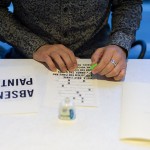 Freedom to Create, Rethink, and Uncover: Participating in Broodthaers’s Process Art making during Erasures: A Poetry Workshop Inspired by Marcel Broodthaers. All photos by Beatriz Meseguer/onwhitewall.com

If you’ve read some of my other blog posts, you’ll know that MoMA has been experimenting with “pop-ups”—drop-in learning and art-making spaces—in closer proximity to the galleries for the past couple of years. These impromptu spaces are something that the Department of Education has long advocated for because offering hands-on activities helps visitors make connections to the art on view. 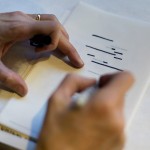 Creating from Erasing: A Workshop Inspired by Marcel Broodthaers Marcel Broodthaers: A Retrospective bursts at the seams with text in all forms. Given Marcel Broodthaers’s interest in language, it’s fitting that MoMA’s second-floor bookstore is where, every Tuesday for the next four weeks, visitors have the opportunity to explore the artist’s work in a workshop led by Elizabeth Zuba, a poet and translator of the artist’s work, and Diane Bertolo, an artist and Broodthaers enthusiast.