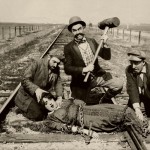 MoMA’s celebration of the landmark year 1913 continues with the 15th installment in our series of videos highlighting important works from 1913 in the Museum’s collection.

Send in the Clowns

These notes accompany the program Send in the Clowns, screening on December 23 and 24 in Theater 3.

While this is intended as a fun holiday program, a few comments might be in order. First, I should acknowledge my personal prejudice against slapstick. I have felt that Charles Chaplin and Buster Keaton rose to the heights of screen comedy by distancing themselves from their Sennett/Normand/Arbuckle roots. I know this hurts colleagues like our estimable pianist Ben Model and other friends, but the philosophy of “anything for a laugh” (evident also in most of Mel Brooks’s work and the early films of Woody Allen) seems incongruous to me, if we are talking about “ART.” I won’t even dignify The Three Stooges or Abbott and Costello (there go my other friends) with a mention. (So kindly disregard that mention.) Seriously, though, I have always sought out some logical structure, character development, or visual invention in determining the worthiness of a film. This doesn’t mean that I am incapable of laughing at silly antics, and I fully acknowledge that some of Keaton’s (The General, Steamboat Bill, Jr.) and Chaplin’s (Monsieur Verdoux, Limelight) greatest works can sometimes be painfully unfunny, but there is an imaginary line in what’s left of my brain that makes me distinguish between entertainment for its own sake and art. However, I don’t wish to rain on your parade or your holiday spirit. If nothing else, this program attempts to establish a lineage that eventually leads to greatness.