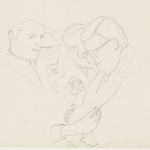 On View: Wangechi Mutu’s “One Hundred Lavish Months of Bushwhack”

The Modern Myth: Drawing Mythologies in Modern Times, a new exhibition organized by my colleagues Geaninne Gutiérrez-Guimarães and Luis Pérez-Oramas, opened in the Drawings Galleries last week, bringing together a stunning display of works from MoMA’s collection that draw on the motif of mythology. One eye-catching work in the contemporary section of the exhibition is a large-scale collage by Wangechi Mutu titled One Hundred Lavish Months of Bushwhack. She made this work in 2004 during her artist-in-residency at the Studio Museum in Harlem, and it was acquired by MoMA directly from her soon after our curators saw it on view in the Studio Museum’s exhibition Figuratively.

Though she has also worked in video, sculpture, installation, and, most recently, performance (as part of Performa in 2009), for the past several years Mutu has produced stunning collages of fantastically ornate hybrid women, composed of cut-out images culled from magazines ranging from Vogue to National Geographic, outdated ethnographic surveys, pornography, and botanical illustrations. Mutu is interested in how stereotypes become ingrained into the public conscious, and through her art she investigates gender and racial stereotypes, in particular those pertaining to black women, formulating a distinctly personal position on feminism, postcolonial continental Africa, and globalization.