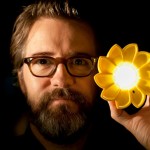 Olafur Eliasson’s Little Sun: “A Work of Art that Works in Life” Since the early 1990s, Danish-Icelandic artist Olafur Eliasson has used art to challenge how we experience and interact with the world. The Museum of Modern Art and MoMA PS1’s 2008 exhibition Take Your Time: Olafur Eliasson—the most comprehensive exhibition of the artist’s work to date—transformed MoMA’s galleries into hybrid spaces of nature and culture, prompting an intensive engagement with the world and offering a fresh consideration of everyday life.

Nature serves as a constant source of fascination for Eliasson, but light in particular is one of his favorite mediums and most effective tools. For the artist, light is not incidental: it is an instrument through which he communes with the public. For example, in Room for one color (1997), mono-frequency lights eliminate every wavelength except for yellow, and provoke an involuntary neurological response that intensifies the participants’ perception of detail and dimension. Conversely, 360° room for all colours (2002), utilizes a circular enclosure backlit by 750 lamps that change hue slowly, plunging the participant deep into the color spectrum, dissolving the line between reality and the imagination. Light acts as muse once again in his most recent piece, Little Sun, but this time the artist’s ambition is not merely to use art to alter our perception of the environment; it is to use art to affect social change on a global level.

“I have an obsession with light,” says Eliasson. “How light forms a space. How a space forms light. As a child I grew up in Iceland where there is no sunlight in the winter. It simply stays dark all day. Light became [something that] pulled people together. Light became a way of connecting to other people. Light is social. Light is life.”

The brainchild of Eliasson and solar engineer Frederik Ottesen, Little Sun is a solar-powered LED light described by the artist as a “work of art that works in life.” Nearly one quarter of the world’s population does not have access to electricity. When the sun sets, entire communities grind to a halt. Poverty reduction strategies are difficult to implement, as working hours are limited to daytime, medical care is dangerous to provide, and education levels drop since children cannot study after sunset.

Kerosene lanterns are a common off-grid solution to these issues, yet an evening of breathing in a kerosene lamp’s toxic emissions is equivalent to smoking two packs of cigarettes. As they spend more hours in the home, women and children suffer disproportionately from breathing-related problems, burns, and fires caused by kerosene-powered lanterns and candles. And while polluting homes on a local level, kerosene also impacts the environment on a global scale, releasing 190 million tons of CO2 into the atmosphere per year. Little Sun in use for reading. Photo: Michael Tsegaye

In addition to being healthier and more eco-friendly than kerosene, Little Sun is also more affordable. The cost of one Little Sun lamp (which lasts approximately three years) is equivalent to the cost of three to six months of kerosene-fueled light. The Little Sun may be small, but like its namesake, it is extremely powerful. A five-hour charge produces up to three hours of bright light, and up to 10 hours of lower light.

“It’s for cooking, eating, reading, learning, but it’s also for earning,” says Eliasson. “The distribution part of this project is also powerful. If [local merchants] make a few bucks selling it there’s something there that I consider a work of art as well. The microeconomic infrastructure that needs to take this to the end user is also part of the Little Sun vision.”

Since its 2012 launch at the Tate Modern, Little Sun has not only received official certification from Lighting Africa—a joint IFC and World Bank program—but, to date, 126,402 lamps have been distributed worldwide; one in three going to areas without electricity. The lamp currently has distribution in seven African countries, Burundi, Ethiopia, Kenya, Senegal, South Africa, Uganda, and Zimbabwe, as well as in the United States, the European Union, Canada, Australia, and Japan.

MoMA and the MoMA Design Store are proud to support this brilliant initiative, and through April our store windows will be dedicated to the Little Sun project, with the goal of bringing these pressing social issues to light and empowering the public through art and design. Every purchase makes it possible for the Little Sun to be sold in off-grid communities at locally affordable prices. To Eliasson, one part of the artwork is the lamp and the activities it enables. The other is the successful distribution of the Little Sun in off-grid communities, and its journey from production to usage.

“I need you to power this project” says Eliasson. “Holding power in your hands is very liberating. It makes you feel resourceful, connected—whether you’re a child or adult, on-grid or off-grid. This is something we all share. In everyday life, it is important that we critically engage in global initiatives and local contexts. Our actions have consequences for the world. Little Sun is a wedge that opens up the urgent discussion about bringing sustainable energy to all from the perspective of art.” Visit any of the MoMA Stores to see the windows, learn more about the project, and to purchase your own Little Sun. Or, if you don’t live in NYC, the Little Sun is also available at MoMAstore.org.