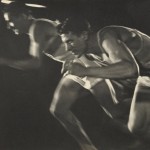 They don’t call it a “photo finish” for nothing! There is something energizing about the most tightly contested races, something captivating in the physical strength and strain of athletes competing at the limits of their ability. I’ll admit I’ve caught Olympics fever. 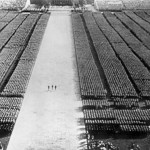 Fascism on the March Triumph of the Will. 1935. Germany. Produced, directed, and edited by Leni Riefenstahl

These notes accompany the Fascism on the March program on December 15, 16, and 17 in Theater 3.

It was inevitable that the movies, as the most popular and influential medium of propaganda in history, would respond on many levels as the relative calm produced by the 1919 Treaty of Versailles gave way to the madness that arose out of the worldwide Depression. The Hollywood studios, which were somewhat dependent on the European market, approached the political and economic issues very gingerly. Even Confessions of a Nazi Spy (1939), released only four months before the invasion of Poland, tiptoed around anti-Semitism. By then the handwriting on the wall should have been evident to everyone, but 18 months later, Charles Chaplin was under pressure not to release The Great Dictator.