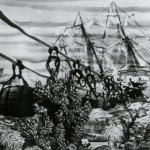 These notes accompany screenings of Karel Zeman’s The Fabulous World of Jules Verne on December 5, 6, and 7 in Theater 3. The Fabulous World of Jules Verne. 1958. Czechoslovakia. Written and directed by Karel Zeman

Our series is dedicated this month to an all-too-brief look at developments in the field of animation in the 1940s and 1950s.