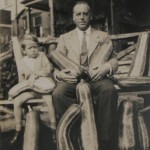 The Ordinary and the Monumental: Recent Photography Acquisitions at MoMA I’ve recently had the good fortune to assume the role of cataloguer in MoMA’s Department of Photography. The greatest perk of my position is simply that I get to work with the photographs in the Museum’s collection on a daily basis. One of my first tasks in the department was to catalog a number of important works that recently entered the collection—some by purchase, some by gift. Among my favorites were three photographs by Carleton Watkins, including this awe-inspiring albumen silver print of a crate of peaches; works by Judith Joy Ross and Inge Morath; and a collection of snapshots that came in as the generous gift of New York collector Peter J. Cohen.

One of the reasons I like Rineke Dijkstra’s photographic portraits so much is because of how she manages to convey the vulnerable side of her subjects, caught at a decisive moment of transition in their lives, usually from adolescence to incipient adulthood. Dijkstra was trained at the Gerrit Rietveld Academie in Amsterdam, and since the mid-1990s she has gained international acclaim for her penetrating pictures of teenagers and young adults. Using a 4×5-inch field camera with a standard lens and a tripod, she creates exacting portraits—frontal views, centered in the frame, posed against a minimal background—that offer remarkable observation and emotional force. Her subjects gaze directly at the camera, combining brooding psychological intensity with the formal classicism of seventeenth-century Dutch portraits by painters such as Johannes Vermeer.