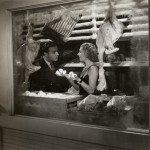 Frank Borzage’s History Is Made at Night History Is Made at Night. 1937. USA. Directed by Frank Borzage

These notes accompany the screening of Frank Borzage’s </i>History Is Made at Night</a> on January 5, 6, and 7 in Theater 3.</p>

Frank Borzage (1893–1962) (like last week’s subject, Leo McCarey) was a great romanticist who deserves to be better remembered. In the silent period, after a decade-long apprenticeship as a director and sometime actor, he made such visually striking, stylish, and deliriously romantic films as Seventh Heaven (winner of the very first Oscar for directing), Street Angel (which we looked at last spring), The River, and Lucky Star, all starring Charles Farrell and Janet Gaynor (except for the forgettable Mary Duncan in The River.) Borzage’s career took a few strange turns in the sound period, especially for a former minor silver miner from Salt Lake City.