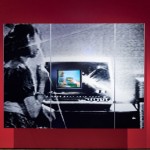 There has been no shortage of commentators noting the effect of the increasing circulation of images on the development of artistic production. From the current “Art vs. Image” issue of Texte zur Kunst to Hito Steyerl’s influential 2009 essay “In Defense of the Poor image,” contemporary art’s concern with mobile images has grown with the proliferation of technologies that facilitate it, both hardware (laptops, smartphones) and software (Tumblr, Final Cut Pro).