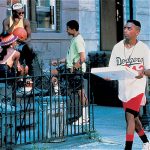 In 2008, and again in 2011, MoMA’s Department of Film presented selections of summer movies from the collection—from high-octane blockbusters like Jaws to sweltering French romances and gritty Japanese crime dramas. In the spirit of those series, I asked members of MoMA’s Film staff to weigh in on some of their favorite summer movies.

I’ll go with Do the Right Thing. Spike Lee made a film so scorching hot you could feel the sidewalk burn your feet even while sitting in an air-conditioned theater. In 1989, I was still five years away from being a full-time New Yorker, but somehow the characters felt like friends I had known for years. No surprise that I now live blocks away from where the film was set, and I still love a good Brooklyn slice from the pizzeria.
–Rajendra Roy, The Celeste Bartos Chief Curator of Film

A summer film that lingers in my memory is Eric Rohmer’s Le rayon vert (The Green Ray) (1986), a quiet, gentle film about how the times and activities that most people consider the essence of fun and joy can be challenging for a sensitive soul. It is a deep, empathetic portrait of a type of character rarely portrayed in cinema, and it is full of subtle insights about the games people play.
–Fred Hatt, Projectionist, Audio Visual The summer months are for research and developing projects, so what better summer pick than Jean-Luc Godard’s Le mépris (Contempt) (1963), a work fundamentally about the process of filmmaking. Fritz Lang plays himself as a European director at odds with his American producer and French screenwriter (Jack Palance and Michel Piccoli, respectively) working on a fraught remake of Homer’s Odyssey. Brigitte Bardot, as the screenwriter’s wife, completes the creative, philosophical, and sensual triangles that are drawn throughout. Godard’s first film in color—shot in Capri in CinemaScope—is a self-reflective essay on both cinema and sun-drenched delight.
–Sophie Cavoulacos, Curatorial Assistant, Department of Film

In the summer of 1994, I was inhaling movies. I worked at a local video store (The Movie Hut) and was going to the movies at least twice a week. I was not educating myself on the classics of cinema, but watching anything and everything that caught my 16-year-old eye. I’m talking Wolf, with Jack Nicholson and Michelle Pfeiffer (neither of their finest hours), Wyatt Earp, with Kevin Costner (not his finest three hours), Blown Away (both the Tommy Lee Jones and Corey Haim versions)…the list goes on. In the midst of all this, I saw James Cameron’s True Lies on opening night (of course). I was forever dragging my friends to see films they’d actually enjoy (Species) and films they wanted to immediately forget (The Ref). By then I was reading Premiere and Movieline, so I knew True Lies was an expensive film to make and that it had a colorful production history. I was jawing at my friends, “Guys, this film cost like $120 million! Cameron is under a lot of pressure to deliver!,” etc. They did not care. They liked Arnold, and they sort of trusted me to pick films and that was enough. By the end of the evening, they had all forgiven James Cameron for The Abyss and wanted to know how he landed a harrier jet in Miami. I was a little speechless myself, due to both that insane chase on the seven-mile bridge in the Florida keys and the fact that Tom Arnold was kinda likable in the movie. Schwarzenegger. Harrier jets. James Cameron set pieces. All of the ingredients you need for a great summer movie.
–Sean Egan, Producer, Film Exhibition Planning and Administration and Projects Lindsay Anderson’s The Whales of August (1987), starring the legendary Lillian Gish and Bette Davis as elderly sisters at their summer home on an island in Maine, hits home on many notes for me. Not only have I spent the best part of every summer since I was four months old in a very similar house on an island very near to where the film was shot, but the family dynamics hit home as well. My parents were both older, and my father’s sister quite a bit older than he. Aunt Catherine had retired to Maine and spent decades telling everyone that Bette Davis should play her in a movie, and at the end of her life Catherine looked very similar to Miss Davis in The Whales of August. Whenever she came out to the island, there was always something: out for a lovely evening boat ride, my father would say, “Look at the moon! What a lovely night!” Aunt Catherine’s reply: “The water is up to my ankles! Who cares about the moon?” Now, it’s just my brothers and myself sharing the island cottage, and at the beginning of the summer I am reminded again of The Whales of August and wonder what I can look forward to during my summer visits to our heavenly island retreat.
–Kitty Cleary, Finance Specialist, Circulating Film Library

The trailer to Joshua Logan’s 1955 adaptation of William Inge’s Pulitzer Prize–winning play, Picnic, tells you most of what you need to know about a very steamy movie that, for me, symbolizes summertime. A handsome stranger comes to town, the vivacious local women are bored to tears by the wearisome local men, and the last few days of summer signal a melancholy return to routine, work, and monotony in a small Kansas burg. The film stars a very striking William Holden as the drifter Hal Carter, who transforms the town’s traditional Labor Day picnic into a bit of a Midwestern bacchanal! The very best scene in the movie is indeed the dance sequence on the dock after the daylong picnic. The townsfolk are drowsy and sated, and the glow of the rose-red paper lanterns makes everyone look young and beautiful as they quietly chat about the day now long gone. This iconic sequence begins with Hal and the teenaged Millie Owens on the dock listening to romantic music coming from the bandshell. Millie is awkward and out of step with the music’s rhythm. Hal shows her a dance he learned in California, snapping his fingers and twisting his hips. Millie follows along but can’t get the moves quite right. In the background, Millie’s older, glamorous sister Madge (Kim Novak) is in perfect lockstep with Hal’s instructions. When Millie gives up, Madge moves onto the dock and Hal freezes upon sight of her. Wearing a pale pink, form-fitting dress with a swirling skirt, Madge mimics Hal’s dance steps and when the two touch hands for the first time, they stop moving. This momentary immobilization plants Hal and Madge in their own world while their dreamy dance is in full sight of some townsfolk, and the ladies appear to secretly wish it were them—or perhaps they remember a night when it was their fate. When you watch Picnic next time, take a look at how Holden takes hold of Novak’s right hand and works it during the dance. Eventually, he has her hand on his heart.
–Anne Morra, Associate Curator, Department of Film