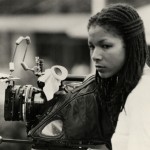 Euzhan Palcy Has Them Dancing in the Aisles

French-Caribbean filmmaker Euzhan Palcy (b. Martinique, 1958) creates politically engaged work exploring themes of race, gender, and social justice from a decidedly feminist perspective. She has written, produced, and directed over 15 fiction features and documentaries since 1983, when her first film, Rue Cases-Nègres (Sugar Cane Alley) won a Silver Lion award at the Venice Film Festival. The director came to The Museum of Modern Art for the opening of her first U.S. career retrospective, Filmmaker in Focus: Euzhan Palcy</a>, (in the MoMA theaters through May 30) and spoke with us about her earliest recollections of filmgoing; her experience as a black woman in the film business; her breakthrough debut; and such signature films as A Dry White Season