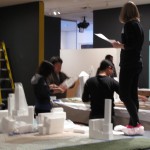 Rising Currents: Looking Back at Putting Process on Display ARO team in the midst of installation. Photo: Ingrid Chou

As the first of five exhibitions in the Issues in Contemporary Architecture series, the unprecedented nature of Rising Currents presented a number of firsts, including some novel moments in MoMA’s exhibition-making process: the first time producing an exhibition without a checklist of objects well in advance of opening; the first time exhibition content and exhibition design developed so closely in tandem; and the first time our modest, minimalist model platform held the weight, intellectual and actual, of five whole teams of architects, planners, ecologists, and their well-intentioned installers. (We really put that poor thing to the test, but I think everyone is the better for it). We found Tim Burton in London. Just as was the case with the Museum’s Pixar exhibition in 2005, we discovered that he, too, held a body of work that had never before been seen by the public. In Tim’s case, there was childhood ephemera, high school papers, cartoons, early 8mm and 16mm amateur films, sketchbooks, drawings, verse, art for a number of unrealized film and book projects, work related to well-known feature films, and material cut from his 1997 book The Melancholy Death of Oyster Boy. Keeping things new and fresh would not be a major concern, and we recognized that we would be relying less on studio archives than we had originally expected. The obvious issues were what to select from a personal archive that contained close to 10,000 elements, and how to make sense of it all.