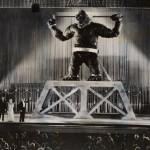 I was reticent about including Merian C. Cooper and Ernest B. Schoedsack’s King Kong in this series. True, we’ve already shown the filmmakers’ classic documentary, Grass (1925), but, in the eight intervening years, the filmmakers seem (at least superficially) to have moved in a very different direction.