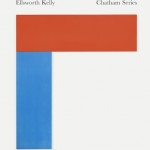 Cover of the exhibition catalogue Ellsworth Kelly: Chatham Series, published by The Museum of Modern Art

The iconic American artist Ellsworth Kelly celebrated his 90 birthday on May 31, and in his honor, MoMA has reunited the 14 ell-shaped paintings of his seminal Chatham Series for the first time since they were originally exhibited in 1972.

Though it is whimsical to think that the ell-shaped canvases were chosen as an ode to ELLsworth kELLy’s big day, the paintings are considered to be among Kelly’s greatest contributions to abstract art. Chief Curator of Painting and Sculpture Ann Temkin details the fascinating story behind the series in MoMA’s new book, Ellsworth Kelly: Chatham Series.

In 1970, Kelly decided to leave New York City, where he had been living and working since the 1950s, for a more rural environment. After a period of exploratory road trips, he settled in Spencertown, two hours north of Manhattan, and established a studio in the nearby town of Chatham. This newfound location proved to be an important influence in Kelly’s artistic development, serving as an inspiration for his work.

Kelly’s studio in Chatham was in a 19th-century brick building featuring nearly 12-foot-tall windows along its upper floor. After spying the striking windows from the sidewalk while exploring the town, Kelly entered the barber shop on the ground floor of the building to inquire about the space and learned that, after stints as an opera house, banquet hall, roller rink, and more, it was functioning as a storage space, holding the town’s Christmas lights. The barber and a neighboring shopkeeper co-owned the space, and they agreed to rent it out to Kelly for $50 a month. The space was far more spacious than any studio Kelly has previous occupied, and the isolated location allowed him to explore his ideas without external influence. After a year of transforming and customizing the space for his needs, Kelly began work on the first series he would produce there in 1971. Each of the 14 large-scale paintings in the Chatham series are made of two monochromatic canvases that are joined together at a right angle, yet no two are the same, allowing the artist to experiment with color and proportion. Temkins’s essay provides an in-depth exploration of the various aspects of this iconic series, including scale, process, and the reception the Chatham Series received when it was first exhibited to the public at the Albright-Knox Art Gallery in Buffalo, in 1972. The paintings now belong to 14 different collections, but Ellsworth Kelly: Chatham Series brings them back together for the first time since their debut so museumgoers and readers alike can explore one of Kelly’s most significant achievements in its entirety. For more on the series, download a free PDF sample of the exhibition catalogue for an excerpt from the essay. The book also features as essay by the director of the Albright-Knox Art Gallery that accompanied the first exhibition of the series, vibrant reproductions of each of the 14 paintings, additional illustrations including vintage photographs of Kelly’s studio, and much more. 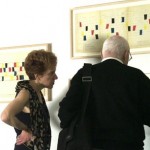 Artists in Their Own Words: The MoMA Oral History Program

The transcripts of the Oral History Program have long been a central part of The  Museum of Modern Art Archives, known to many in scholarly circles as an unrivaled primary source for the collective memory of MoMA’s history.

If you’ve visited the Museum in the past few months, you may have seen the special installation of F-111, the massive 23-panel painting that artist James Rosenquist made to wrap around the four walls of the Leo Castelli Gallery