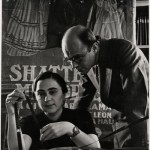 MoMA’s Department of Film at 80: An Unprecedented Vision How does one map out the scope, purpose, and practice of something that had never existed before? That might be the question Iris Barry and John E. Abbott asked themselves as they were drafting “An Outline of a Project for Founding the Film Library of The Museum of Modern Art” (1935).